The Teeny Weeny Truth (about male frontal nudity in films)

Recently there was a big commotion  about the possibility of seeing Ben Afleck's penis in "Gone Girl."  Of course, it was nothing but commotion.  At the same time there was an undercurrent of murmurings about the lack of frontal male nudity in films.  Why is it so many women do the money shots and men don't?  I would think the answer to be fairly obvious, (or maybe not).  Not all men are created equal, some are more equal then others.  Unfortunately a lot of things effect that equality, sometimes on a minute to minute basis.  Let me use women's breasts to make my point.  If you have an actress who wears a 38 D cup bra, and you put her in a cool room, she doesn't need to change to a 32 A cup.  However, if your average actor takes off his pants in a cool room, things minimize rather quickly.  And it's not just temperature which can effect these changes; all sorts of variables suddenly come in to play.  Even someone well endowed has times when all he seems to have are short comings. 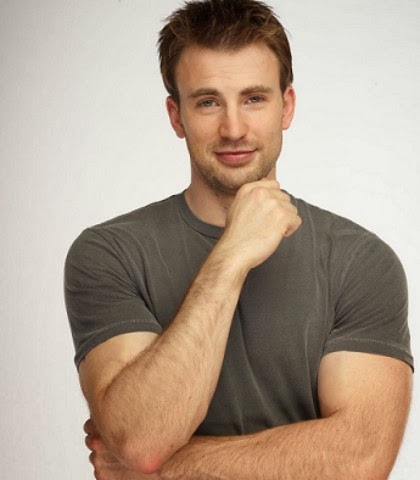 Take Chris Evans, there are a lot of people who would love to see him doing full frontal on the silver screen.  Is it ever going to happen?  While 'never' is a terrible word to use, I'd say the possibilities of it happening are very, very unlikely. For him to do so, I suspect the scene would need to be the lynch pin of the film, that integral part holding it together.  Of course, then there is fan expectation.  What if it's a cold day on the set?  Would you really want fans to ask "is that all there is?"  In spite of what people may want, something like that can ruin a career, especially if that's the only reason they go see a film.  Sometimes the smartest move is not to give fans what they want.  If some things didn't seem to have a mind of their own, if they weren't fickle about the temperature, or who's looking at them.  If, in general, things were more equal, you might see more male frontal nudity.  As I said, however, there really are too many variables and, unfortunately, that is the teeny weeny truth.