Working as a paint desk manager I get to meet a lot of people, many of them are contractors, so it's not unusual to have casual conversations with them regarding paint, and jobs.  I was chatting with one yesterday about cell phones and Otter Cases, and just how safe they are, when suddenly a woman standing about f15 feet away yelled out his name.  Not just his first name, mind you, his first and last.  He looked up as she approached the desk saying, "it's been 25 years at least."  She didn't introduce herself so she must have assumed he knew who she was.  "What are you doing?" she asked, and he said "mostly laying tile."  "My kids are in grade school," she continued, without pausing "I waited to have kids.  Do you have children?" His response?  "No."  "Are you married?" she asked.  "Not exactly," he said.  And then she asked "am I putting you in an awkward position?" 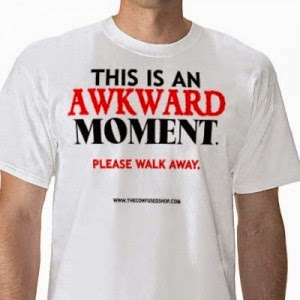 At this point I turned and walked back past the tinting machines because I was feeling the awkwardness of the situation.  I have no idea what he said to her, but when I turned back to the counter, about 15 seconds later, he was going through self-check-out and she was still standing at the paint desk.  The conversation between them couldn't have lasted more then 30 seconds - which is not a long time if they happened to have been friends 25 years ago.  They may have gone to high school together, I don't know.  She was quite heavy, so I suspect the passing of time has weighed upon her.  I do know the second she yelled out his name she seemed more interested in interrogating then in talking.  He never said "hi," or called her by her name, so he may not even have remembered her.  And it was awkward.  I felt sorry for him.  There is this assumption out there that you need to get married and you need to have kids, and if you don't there is something wrong.  This is the feeling I got from her when she asked if she was putting him in an awkward position.  Basically, she was being rude and it's sad to say, but I don't think it really bothered her.