The Breakfast for Dinner Revolution

For the past couple of days I've had this craving for pancakes.  So intense was this craving, I actually mentioned it to associates at work.  I was just really, really hungry for pancakes.  Last evening, on my way home from work, I decided to take action and quell this hunger.  Normally, when I make pancakes, they're made from scratch, of course that would have entailed purchasing eggs as well as flour.  It's just a craving I told myself, and convinced myself into buying a box of Hungry Jack Funfetti Complete.  How could I resist confetti pancakes.  Anyway, as my pancakes cooked on the griddle, I started checking out the box just see what it was I was eating.  I was really surprised to read the following blurb: Make  breakfast time family time! When your family is hungry for something delicious for breakfast give them Hungry Jack pancakes."  Holy Crap!  This was going to be my dinner, not my breakfast!  I must have missed the edict outlawing pancakes for any other meal.

Of course there was no such ruling.  There are a lot of people out there, however, who have been brainwashed into thinking you can only eat pancakes at breakfast.  Like bacon and eggs, where is it written bacon and eggs can only be eaten at breakfast?  Years ago, returning from a day trip to Washington DC with a friend, we stopped off to get something to eat.  Let me tell you, he was so excited to discover the restaurant served Breakfast for Dinner I thought for a moment the Rapture had arrived.  He was almost as surprised that I had been raised without any "breakfast food barriers."  That's right.  There were times when we had pancakes for dinner.  Sometimes we would have scrambled eggs and bacon!  My brother was a cold cereal aficionado.  Booberry, Frankenberry, Count Chocula and Captain Crunch were all he ate... ever.  Did they stunt his growth?  Did they do him wrong?  Nope.  Today he gets paid rather well to write code for things hospitals use, don't ask me what, I don't know. 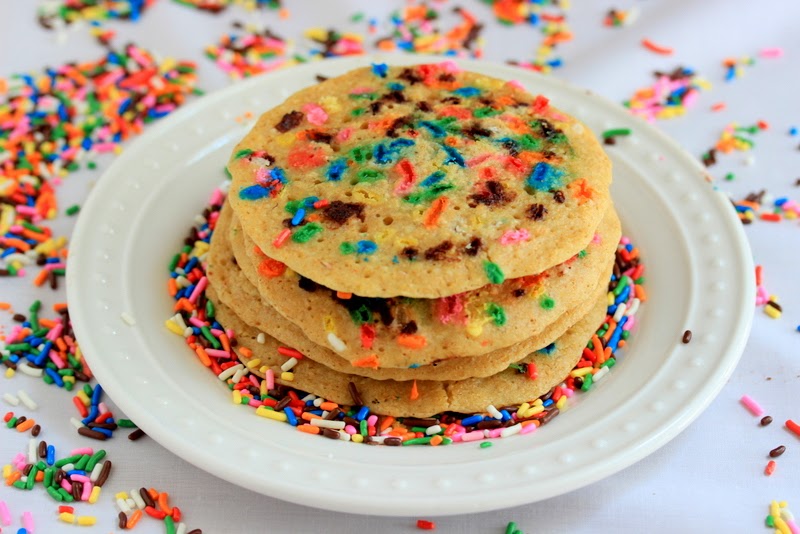 At some long, forgotten point in our past, some pudding head sat at a desk and divided foods up into groups, those which would be great for you in the morning and those which might not be so hot.  What's interesting is that the box I bought makes both pancakes and waffles.  Paradoxically, while one is considered a breakfast staple, the other can be eaten any time of the days.  Ever hear of Chicken and Waffles?  With this mix you could have Chicken and Funfetti waffles.  Wouldn't that be a colorful dinner?  People forget that their stomach doesn't know what time it is.  When it gets hungry all it wants is to be fed.  You could feed it ice cream for breakfast and it wouldn't care.  I think we should start a revolution and start eating breakfast for dinner.  Tomorrow morning, instead of nuking a bowl of oatmeal, order a pizza instead.  Yum!