Spring has arrived, for the most part, and it is the season of paint and deck stains.  This is that time of year when people dolefully look at their decks and realize they need to do something to slow down the aging process.  This is also that very important time of year when retail associates, especially those selling paint and stains, need to polish off their customer service skills.  While the vast majority of customers we deal with are honorable, we also need to deal with the liars, scam artists, and thieves.  Here is a prime example from yesterday.  Late in the afternoon an irritable customer came up to the paint desk complaining that earlier in the day a paint associate had sold him the wrong color stain.  Now occasionally this will happen when we will accidentally mix the color to the left or to the right, mistakes do happen.  The customer claimed he had asked for 4 gallons of Bordeaux (a dark purple color) and my associate had mixed Grand Cayman (a pale orange color).  There were seven different color paint chips between the Bordeaux and the Grand Cayman, and the associate in question has been mixing and tinting paint for 17 years.  That kind of mistake never happens.  But, demonstrating good customer service, I offered to mix him 4 more gallons.  He was happy with that, so, grabbing a swatch book and put a check mark in the correct color and asked if he wanted the premium or the regular stain.  He pointed to the premium, so I put a check there.  I had just started tinting the 2nd gallon when he began complaining I was mixing the wrong stain, that he did not want the premium quality and that I had made a mistake.  When I showed him the swatch book, he claimed that I had checked the wrong box.  Ha ha.  For those of you who don't know, this is an old trick.  Think of it as bait and switch from a customer perspective:  they pick an expensive finish and claim you made the mistake, that they wanted the cheaper finish, so you need to give them the paint or stain at a cheaper price.  His problem was that he thought I was farther along in the tinting process.  I demonstrated my good customer service skills by smiling and mixing him 4 gallons of the cheaper stain. 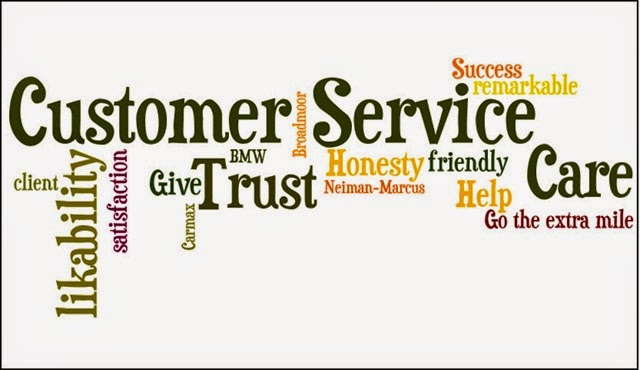 Now I'm not saying that this customer was a scumbag, but his behavior does fit the pattern.  Each one of those gallons will be retinted, each to a different color, and marked down as a mis-tint.  You see there are people who have a bad habit of changing their mind after they've returned paint.  The lower, mis-tint price has a way of making the color more attractive.  I wouldn't be surprised if he showed up on Tuesday to see to see if those 4 gallons were now in a color he could live with.  It's a sad way of trying to keep some people honest.

Of course, I suspect if you were to question this customer about my customer service skills he would probably rate me a little below average.  I didn't really give him what he wanted.  On the other hand there are many more customers who think I'm a joy to work with because I do really give them what they want.  All of my associates are reliable and tenured, they rarely make mistakes and all of us provide the customer service people expect.  Of course, if you're a scumbag, beware.