I suspect some of Vladimir Putin's neural transmitters are misfiring.  Just like the pilot( and or maybe co-pilot) of the missing MH370, he doesn't seem to be maneuvering logically, except in his own head.  This whole bit about the Ukraine and Crimea splitting?  Weird.  I'd read one columnist who suggest ol' Vlad was trying to reunited Russia, return it to it's stature during the Tsar, perhaps even name himself Tsar.  Weird, you know what I mean.  There was a reason the Russian Empire failed - size.  That has always been the case of with Empires, they get too damn big, then they start to lose control and eventually begin spinning out of control.  Centuries ago it took a long time for this to happen but with the Internet years have been chopped down to hours and days.

I also suspect that in his chuckle head brain he thinks troops and time are the answer to any problems which may arise.  If you send enough troops and keep them there for a long enough period of time any and all opposition will fade away.  Doesn't work, never has.  How long were the Romans in Germany?  Centuries?  And there was constant opposition.  The people there did not adapt, they did not acquiesce, no they remained steadfastly hateful of the Romans and their Empire and, eventually, handed Rome a plate of shit.

And then there's the homophobic stuff about there being no gays, or lesbians (except for Pussy Riot) in Russia.  That sounds like the kind of crap you hear from the Crazy Christians in this Country, except I'm pretty sure he is not now, nor ever was a Christian.  I read in Wikipedia he attends the Russian Orthodox Church on high holidays, you know, to make himself look.  For all you know he's sitting in the pew playing Flappy Bird on his Iphone.  Anyway, this homophobic stuff doesn't make sense, especially when you consider all those photos of him shirtless wrestling tigers, or what ever.  My first thought when I saw one of those photos was "damn, that's queer."  I guess in his mind it's a demonstration of his virility.  Actually, all it really proves is that he doesn't have tits, nor much hair on his chest. 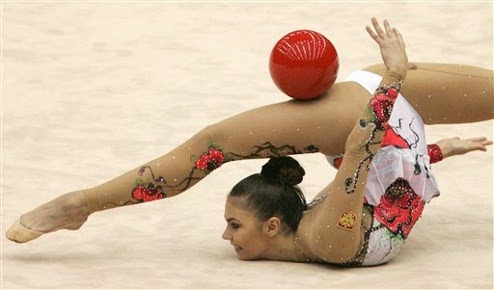 After years of reportedly womanizing, he divorced his wife one or two years ago.  And, of course, the rumor mills started and he was purportedly linked to several different woman.  One of those is  pictured above, her name is Alina.  I chose that picture to post because it reminded me so much of the locker room talk I heard when I was in high school.  You know what I'm talking about.  Guys saying "I'd bang that chick," and "she could sit on my face."  Well, it's obvious she does wonders with balls so who knows what else she's good at.

Putin is 61 years old and, again I suspect, those neural transmitters have been misfiring for quite some time.  It wouldn't really surprise me if he was secretly waiting for a telegram from Teddy Roosevelt inviting him to go bear hunting in Alaska.  That ain't going to happen.  He's going to keep on doing what ever he wants to do because he's very powerful.  This means Russians should probably be anticipating at least one more civil war.  The only thing which may stop him might be Malaysian flight MH370 flying into the Kremlin and, for all we know, that may be where it's headed.