When I saw Justin Bieber was arrested for  speeding (among other things) I had to laugh.  I laughed even harder when I saw he'd been driving a rented Lamborghini.  With all of his money, he's drag racing a rental.  How stupid.  If you're going to race a car you should at least own the freaking thing and have your mechanics juice it before you drag it.  As soon as I read the article I knew there was going to be very little sympathy drifting his way, some criticism, a smidgen of concern, but overwhelming those were the jokes.  Bieber has become a punch line.    He has become a joke.  Instead of laughing with him, people are laughing at him.  Someone should have told him that it's bad to have people laughing at you.  Give me a break, who in their right mind would want to be thought of as a dip shit?  And then I wondered just where his parents were.  Surely they must be voicing some concern about his recent spate of immature behavior.

And then I read that his old man was with him when he got arrested, notice I'm saying 'old man' and not father.  To call someone father is to give them respect, I suspect Bieber's old man is pretty much a losing sack of shit.  When I'd read that Jeremy Bieber was with Justin while he was drinking beer, and smoking pot, and shoving dollar bills down G-strings at a strip club, I began to wonder if 'old man' might not be too kind, perhaps parasite is better word. 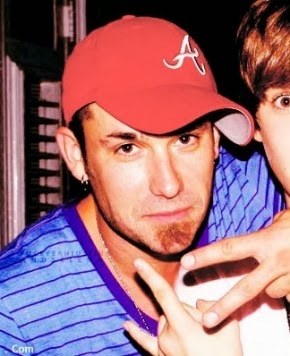 Rather then jump to conclusions, I did a little research.  There was always the possibility I might be wrong.  One of the first indicators proving I was most likely correct was the note in Wikipedia describing his father as a 'musician, artist, and actor.'  Those three nouns hint at the fact he probably could not hold down a job.  From what I've read, he left the parenting process up to Justin's mother and grandparents.  Now he's 38 years old and has a son who's rich and famous.  He has a son who is a recording artist and a musician, two things the older Bieber isn't.  Yet, if you do a search on Google images you'll see that Jeremy Bieber looks and dresses like a 38 year old rock star trying to be 19.  he wants to live the sweet life.  And who help set up the road blocks so his son could drag race in a rental car?  Jeremy Bieber.  Justin Bieber may be turning into a joke, but his old man's a freaking asshole.