Xbox 720, will it be dicked up by the pudding heads at Microsoft?

Since I have an Xbox 360, I received a special email from Xbox to watch the reveal of the new Xbox 720 on May 21.  I'm off work that day so I put it on my calendar.  Should be interesting.  There has been so much hokey pokey info being leaked about the game system, no one is really sure what to expect.  Now and then I will just do a search to see what turds are being dropped on the unsuspecting public, each and every one being dubbed 'official,' or 'from a reliable source.'  The Internet is littered with photos of controllers and consoles which may look a bit on the nifty side but fail logically.  Here's one: 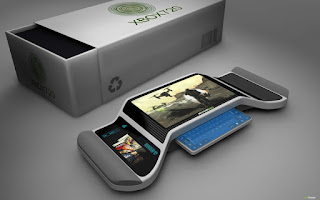 I'll admit the keyboard is neat, but why the screen?  If I buy one, it's going to be attached to my 60" flat screen.  You know?  The one with the amazing sound system?  And are those arm rests on either side? Hhmmm, I guess that's for when you chose to lie on the floor to play your game, or stream your movie, or watch your video.  Maybe Microsoft just wants you to be comfortable.

Actually, what will really be interesting, is how the Xbox 720 is going to tie into the re-release of Windows 8.1, because they are both linked together.  Face it, Windows 8 is an unmitigated disaster, and don't think Microsoft isn't learning a very expensive lesson.  You can change the OS anyway you like, just as long as you remember the customers.  Don't give them something geared towards a product they don't own, like a tablet or phone with Windows 8 installed.  Like I said in an earlier post, there are a lot of pudding heads at Microsoft.  Supposedly 8.1 will provide fixes for the complaints that have been shrieking around the Internet, one of them being the disappearance of the "START" button.  My big complaint is that every time I move my mouse from left to right the Charms pop up and the system pauses, waiting for me to select one.  Yo, pudding heads at Microsoft, it's a mouse, not a finger!  I can't take it off of the screen.  The pudding head who came up with that concept needs to be canned.  The problem was too many pudding heads were not thinking about what the consumer has right now on their desk, or in their hand.  No, they were thinking about what is supposedly coming down the line.  How stupid can you be?