I could not let the chance to mention Wayne LaPierre slip away, even though so many others have already made their voices known.  My first reaction to hearing what he said at what he called the first Press Conference by the NRA after Newtown was to burst out laughing.  Someone should have gingerly pulled him aside prior to his making an asshole out of himself and told him he was going to sound like a jerk.  Evidently nobody did.  Let's be honest, Wayne just doesn't get it.  Guess what?  He never will.  He could have tried to be slightly human, maybe could have said "one of our own used some bad judgement and trained her mentally handicapped son how to use an assault rifle, and for that we are sorry."  Instead he advocated beginning a police state.  You know, start with armed men in schools, and after a while they could have armed men in office buildings, and post offices, and supermarkets.  I think this says it all: 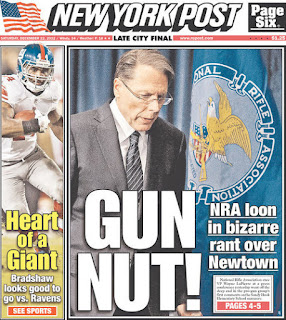 You need to remember the New York Post is owned by that ultra-conservative Australian Rupert Murdoch.  What does this mean for the NRA?  First of all they need to learn that just because an individual is a member his political vote is his / hers, not theirs.  Secondly, they need to begin to learn the art of the soft sell if they're going to survive.  This relying on a dead Charlton Heston cold, dead hand threat just doesn't work well little children have been murdered.  I doubt very much if they will change their attitude or belief that more guns in America, means a better America.  However, I wouldn't be surprised if in the not to distant future we see a new spokesperson.