What a combination, Romney and ME3

This has been a bad month on the job line for me, not because I'm losing mine, no, my schedule is all topsy-turvy thanks to meetings and classes and more meetings.  I can't wait for October to get here so things can quiet down... a little, and I can get back to a regular schedule.

On a whole I'd have to say this past week was on the funny side.  I got to watch some of the secret Mitt Romney tapes and, were I a critic, would have to call them boring and uninspired.  If you've seen any of them then you know, he rambles on and on and on totally avoiding anything substantial.  I saw where the dude who threw the fundraiser is blaming the "help."  How Republican.  My suspicion is that he, himself, taped the dinner for posterity only to discover Romney is the personification of droll.

Ann Romney's plane had to land because of smoke.  Later she whined about being a candidate's wife.  What did she think this was going to be?  A Sunday Social?

Paul Ryan got booed by Seniors and then, from one of the news clips I read, went on to lie about his percentage of body fat.

Quite a number of Republicans are unhappy with the campaign, including Laura Ingram, and the want it shaken up.  I'm sure they must realize by now shaking is not going to help.  They did pay attention to their own primaries, didn't they?  Mitt basically won by default because the other candidates were just to crazily far to the right.

One of the really funny things was Ralph Reed telling Evangelicals they should vote for Romney.  Isn't that going against your faith?  Could this indicate Ralph wants a heretic in the White House?  Or, is it possible he's an White Supremacist in disguise?  Perhaps he doesn't understand that if Mitt gets elected Mormon Missionaries will swarm out of Salt Lake City like a plague of locusts.

And for all of you gamers out there, the real shocker was Bioware putting forth a statement which, and I paraphrase, states that the Mass Effect Universe is large and there are more stories to tell.  I said something similar back in... May? 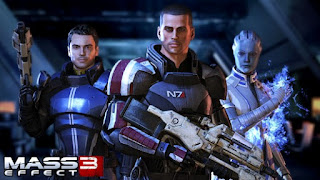 Back then everybody was running around like their hair was on fire because they didn't like the ending of ME3.  Why is this funny?  Because you don't kill off your golden goose and everybody was sure Bioware had loped off its head.  I said that and nobody listened.  Now I read on Gamestop, or maybe it was Rock, Paper, Shotgun that the original team is either reassembling, or has reassembled.  Surprise.
Posted by Dave R at 12:18 PM