Saturday.  Today is the beginning of my weekend which means it's time to catch up on the housework.  I've got one load of laundry (T-shirts... I go through a lot of T-shirts) in the washer and four more lining the upstairs hallway.  I need to pick up somethings at the supermarket and get gas before everybody else tries to do the same thing.  The yard needs to be cleaned.  I should do free weights today, but I might try to get another ride in since that's what kicks in the neurotransmitters.
Yesterday there was an indecisive family looking at vinyl plank flooring.  I greeted them and spent about 5 minutes with them before I left them alone with their inabilities.  This was obvious when the daughter started saying "this goes with my cabinets, but this color goes with my appliances, but this color over here would really go well with my walls."  When she started bringing up her friends, and using the floors in their kitchens as a comparison, I knew her brain had become completely untethered from reality.
And speaking of untethered... how about those advertisers running from Laura Ingraham... ain't that sweet!  She's decided she needs an 'Easter Break.'  If you ask her, I'm sure she'll tell you that eleven companies pulling their advertising from Faux News has nothing to do with her decision.  Nope, she'll explain how she's chosen this week to make room for her family, right in the middle of a boycott.  Ingraham is a prime example of how Conservatives totally fail to understand America.  A majority of people are telling her advertisers she's an asswipe, and those advertisers are listening because that majority is the group that buys their products.  When given the choice of losing revenue or telling Faux News that Laura Ingraham is an asswipe, they're going to tell Faux News she's an asswipe.  Will she learn anything?  Absolutely not.  She hates the majority.  Having them very publicly telling Faux News she's an asswipe?  That's like having millions of Liberal needles shoved up under her phony, conservative fingernails. She will hate the majority even more because they... are... in... control.
I just find this whole thing amusing as hell.
Anyway, I seem to post more pictures of Big Seig than Lily, so today I'll leave you with one of the lovely Lady Lillian. 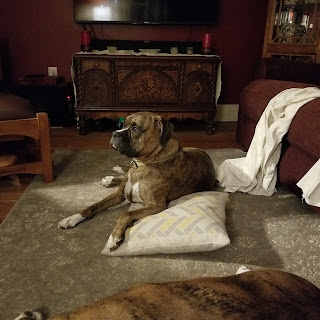 With just a glimmer of Biggie's back.
Posted by Dave R at 8:00 AM