The cost of making Money

So, yesterday we weren't as busy as Corporate thought we were going to be... this was to be expected; not all Americans see a holiday as a day to put themselves deeper into debt.  Corporations don't understand.  They expect continued growth, in fact their yearly budgets reflect a slowly, continually rising effect to consumers.
Here's an example:  2016 just ended and a tradition has evolved in which just about everybody and their brother does a "Memoriam" tribute.  For the entertainment industry, nothing tops the one done by the Oscars.  People like to watch them.  One of the worst was on NBC News.  I thought I'd watch that one and was surprised to find out I'd have to sit through a 30 second commercial.  Wrong.  I didn't watch it.  I find it sad somebody at NBC, which is owned by Comcast, decided they were going to make a buck over dead celebrities.  Somebody in that organization actually calculated how much revenue they were going to make by forcing people to watch that 30 second commercial.  When that person passes, I believe that before the funeral services begin those mourners should have to sit through a 30 second commercial for Handy Wrap, or perhaps Crest toothpaste.
Costs are continually rising, you know, they need to make money. 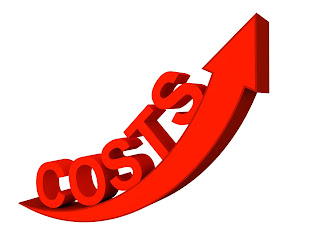 My Mom is in Greenfield on Graysonview, a Senior Living facility.  Right after Thanksgiving I received a letter from them saying I needed to sit down with the administrator and go through her 80 page contract before December 12.  While I was sitting there, initialing and dating every one of those 80 pages, I asked if her rate was going to go up and he said "no."  Last week I received a letter from their corporate headquarters which stated that, per the contract I had just signed, all they needed to do was give me a month notice before raising her rate... and of course her rate was going up.  This was all calculated in advance.  This was also why I had to sit down with the administrator and initial and date a new contract.  And, of course, he didn't point out that little 4 sentence paragraph about the "month notice."  She has the money in the bank so while I was irritated, I wasn't royally pissed off.  What pissed me off was the fact that they wanted me to sign an agreement to the increase and mail it back to their corporate headquarters... they even included a self-addressed envelope.  However there was no postage on the envelope.  And that's what pissed me off.  They were too cheap to even put a damn stamp on the envelope.
Anyway, I didn't mail the envelope back to them.  I dropped it off at my Mom's facility and told them they could mail it to corporate.  They weren't happy about that, no doubt be cause they would have to pay the postage.  Costs are going up constantly, bit by bit, percentage point by percentage point and all too often the only thing they reflect is a profit increase.  It's not about the quality of the service, it's about making the money.