Well, the good news is that I start my new, fixed schedule on February 6 - the shift is 10:30 - 7, and I can not wait!
The bad news is that we have a president elect who's a dopamine junkie.  Notice that I don't use the acronym.  Every time I hear PEOTUS I think of some really, really bad sexually transmitted disease... admit it, doesn't it sound really, really scary?  He has PEOTUS.
Anyway, DT has really, really low approval ratings, which might be equal, or actually worse than having PEOTUS.  One of the reasons for these ratings is his inability to stop texting, most Americans hate it.  Unfortunately for most Americans, he's not going to stop.  This is the result of his addiction to dopamine.  You can't actually be addicted to dopamine, but can become addicted to the action which initiates this neurotransmitter's response.  The response to a text can trigger this response, or a Tweet, and it's not the Tweet itself, but rather the response.  And for DT, the zanier, more incoherent, outlandish the Tweet, the more responses he gets and they kick in his AK47 neural transmitter gun.  That's right, he's a dopamine junkie.  The louder the response from the crowd, the better he feels. 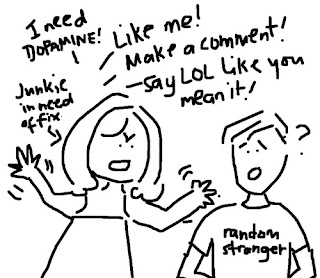 Sadly, this means he will never lose his phone.  For DT, that would be like a heroin addict going 'cold turkey.'  As long as people respond, he will Tweet.  The only way to stop him is to take away his phone, and that will never happen.  We can only pray that someone, somewhere finds away to stop him, otherwise he will Tweet us all to death.