We had our store holiday party last evening. And I went, for a bit.  I'm not a big party person, not because I don't enjoy having a good time, rather I really hate when some horse's ass, who I have nothing to do with... ever, decides to connect with me and make me a best friend.  So, the party started at 7, however I had to close the store and didn't get there until 7:45 and discovered that the seat which had been saved for me was occupied... by a department manager I shall call Cate.  When told she was in my seat she evidently said, "Oh, we can make room for him," which meant a table set for a comfortable 8 was now a crowded 9.  Why didn't Cate do the nice thing and move?  That was something she wouldn't even consider.  You see, nobody likes her.  I describe her as a "fountain of bitterness and hate."  She constantly derides her associates.  She is always complaining about everybody and everything, and always starts by asking "Don't you agree?" or "Don't you think?"  Like "Don't you think Bob in paint spends way too much time in the break room?  I mean, don't you agree he is just a waste of payroll and they should get rid of him, don't you think so?"  My friend Patty says she is one miserable human being.  And Cate likes to share the misery.  While plowing her way through an over-filled plate of food last evening Cate suddenly paused, and then claimed she'd found a hair. 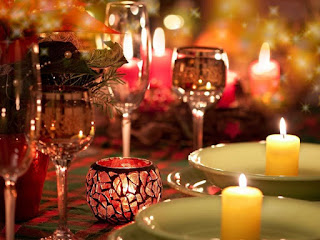 And nobody really reacted.  My friend Patty, who was sitting to her left, quietly said "you should say something," but that was it, nothing more.  Rosemary, who was sitting to Cate's right, did the same thing.  Those were the only 2 people at a crowded table of 9 who even acknowledged her complaint.  Me?  I thought, this was her reward for ruining the seating.  Karma, you know?  And I couldn't help but smile just the littlest bit knowing she'd received a fitting Christmas Gift.