So I had breakfast with my brother this AM.  When I told him I was moving funds from my 401K to more safer investments he looked rather blank, so I explained to him that I was worried about the stock market.  Right now that baby is bubbling like a champagne bottle that's been shaken (by DT) and, I suspect, maybe after his inauguration, the cork is going to pop.  My brother doesn't understand.  He thinks climbing almost 100 points everyday is normal.  He thinks DT is having a positive influence on Wall Street.  I don't.  I'm too old to have my 401K drop like a rock.  I'm playing it safe.
And this whole Russian thing is very funny.  You see DT doesn't understand politics.  The idea that Putin might see him a a dolt, a very rich reality star who believes saying "you're fired" puts the two of them on the same playing field, and he's wrong (of course).  DT doesn't understand world domination.  To him the idea that a foreign government, which has been our enemy much longer than our friend, might want to set him up to knock us down is ridiculous.  DT doesn't realize he's had to file for bankruptcy 4 times because of his own bad decisions.  The truth that DT is a bad man, a very, very bad man who will make us suffer for his own stupidity.  Will he make it through 4 years?  I doubt it.
Anyway, I went to visit my 83 year old Mom today.  She signed herself up for a painting class.  Once a week she goes and and paints a picture.  Spiders.  She's been painting spiders about as well as any 83 year old woman with slight dementia.  This is her portrait of Putin. 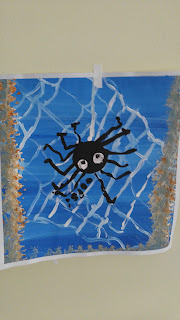 He has 12 legs.  If you look closely you can see she's written "not again."  I don't ask.  I took a picture of this one because she likes the blue background.  There are others.  All spiders.  Not all of them have 12 legs, some have 8, some have 6, and one has 10.  Or maybe it's not Putin, maybe it's Trump.  I mean, every time he turns around there's going to be a finger pointing.  Makes more sense, doesn't it?  Trump saying "not again."