Liars at the Paint Desk

Well, it's Sunday and I have the day off... and I also have a lot of chores to do both inside and outside the house.  Yesterday, however, I had to work and that meant dealing with idiots.  There was the guy who was looking for a ecologically safe way to remove tar from his driveway... and he'd seen some product advertised on television.  He couldn't quite remember the name but was sure the commercial said we carried it.  I know I don't carry anything like that, so I used our app to search for a product similar to what he wanted.  Nothing.  So I said "I'm sorry, we don't carry anything like that," and his snappy retort was "well, I guess I'm going to have to take my business to your competition."  This was supposed to be his way of insulting me, of pissing me off... we hear it daily.
Then there was the gentleman who stepped up to the paint desk with his wife, a gallon of exterior Glidden in his hand.  "This paint is bad," he said.  I checked the label on the lid and saw the paint had been tinted in March of 2013 and said, "this paint is over 3 years old."  He got a little surly and said "look inside the can."  I did and saw immediately what the problem was, this can of paint had been been frozen.  "No," he said, "I take care of my paint, I keep it in the basement.  This is bad paint.  I want another can."  I very politely told him that I couldn't give him another gallon of paint.  "This is 3 years old," I repeated.  His eyes narrowed, then he and his wife walked away. 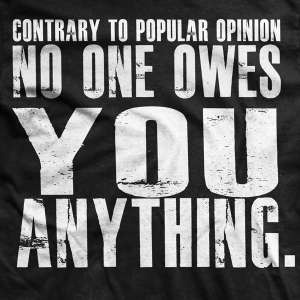 Five minutes later he was standing in front of me for a second time.  "Brandon says you're supposed to give me another can of paint," he smiled.  Brandon was the other MOD working yesterday afternoon.  Now what I really wanted to do was call him a lying sack of shit, but I couldn't really do that, so without saying a word, I mixed him another gallon.
When I asked Brandon about it he said "Dave, I was at the Service Desk and there were people all around and this guy came up and started getting loud."  I asked him if he'd looked in the can.  "Yeah," he said, "that paint had been frozen, and that guy just looked me in the eye and lied right to my face."  In the end it had been easier just to give this liar another gallon of paint just to shut him up.  Personally, I would have preferred kicking his sorry ass out of the store.  We shouldn't be paying for his mistakes.