CTR and the Fail situation

Years ago, when I first started blogging, I had thought if you become popular enough you can actually make money by sharing your opinions.  It didn't turn out that way.  The first blog I had was through Typepad and I was not impressed with the Ads, neither were the people who read my blogs.  As a result I dropped the ads and eventually Typepad, moving over to Blogger.  I could get ads here but don't really see an in point in that.  Advertising only pays if people click through your ads, and by people I mean multitudes.  Being the inquisitive sort of person I am, I educated myself because you never know, some day advertising may actually be relevant... probably not.  You see there is something called a CTR or Click Through Rate, which is the % of readers who actually click on the Ad.  The average CTR on an average blog for a Banner Ad is about 1.1%.  This means that for every 500 readers you can expect 5.5 people to check out the Ad, which earns you nothing.

The whole thing is rather interesting.  If you have a high volume blog where millions hit, advertisers will actually pay you for space.  Then the CTR is their worry, and CTR's are usually low.   But then, to the rescue, comes "The Impression."  For all of those people who are looking at the Ad and not clicking through, there is a formula for calculating how big of an impression the Ad is making on them.  Think of it as subtle brainwashing.  It's been around for years.  You see Impression advertising in print and on television and now tacked on to videos on the Internet.  Any time you click on a video at a news site you're going to be tortured with a commercial.  In fact they are every where.  Muting them out doesn't help because in the Advertiser's minds they're still making an impression on you.  You may not need to buy a car right now, but when you do they're betting if you've seen enough Toyota Ads you'll consider buying a Toyota.

Do a Google image search and you'll be amazed at how many charts have been published detailing all sorts of minutiae about the CTR.  Some of them are amusing, like this one which shows that Ipad and Iphone owners click through more often the Android users. 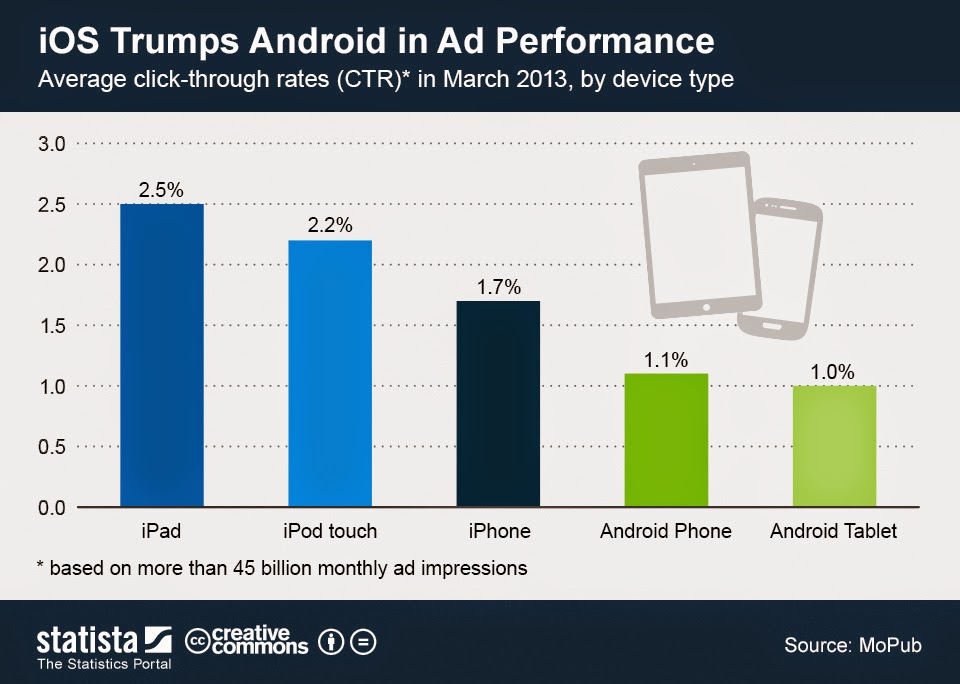 This information is important to Advertisers because it lets them know what kind of Ads to place on what kind of blogs or websites.  What's sad is this information is based on 45 billion monthly impressions.  To this means advertising on the Internet is pretty much a fail / fail situation.
Posted by Dave R at 6:00 AM