I saw on the news where a stupid woman named Shannon Richardson has been arrested for sending ricin tainted letters.  Most, if not all, of the headlines or leads proclaimed her to be an actress.  Wrong.  Supposedly she has credits for working on The Walking Dead, or, actually, those writing the articles claimed that was listed on her resume.  Interesting.  As soon as I seem the blurb about being an actress I went to IDMB to check things out.  Nada.  Nothing.  She doesn't even get a mention.  I have the sneaking suspicion she was the one telling people she was an actress.  Wrong.  If she did appear on The Walking Dead I'm sure it was part of the set decoration.  You know, they call them extras because they help fill in the space.  They are an extra body on the set.  They are not actors.  They never speak.  They add motion to a busy sidewalk scene, or stand in the background on a crime scene.  Actors and actresses have dialogue.  Extras are part of the scenery. 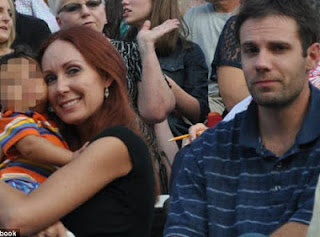 This is what an extra looks like with her estranged husband, married a little more then a year.  Oh yeah, and she's pregnant with her fifth child, her first with him.  I think he got smart and realized the actress was most likely covering her expenses with child support.  She tried to blame him for the ricin tainted letters.  Evidently the police looked at the information she was giving them and decided she was obviously trying to frame him.  This shows you just how bad an actress she is, she couldn't even play that part right.  But then what else can you expect, she was an extra.